Mehdi Ravandi’s artwork deserves a soundtrack. As I’m no good at composing, I’m going to borrow one. Click here to hear some scene-setting music, then read on -> Music.

We see a man carrying a head towards a charity box, seemingly determined and in a rush, …

… we see school girls laughing and playing with a missile in the background, …

… we see a man getting into a body bag, with onlookers waiting and observing like employees on a building site.

Mehdi’s prints are telling a story that appears to be set on this planet, but also possibly on the moon. 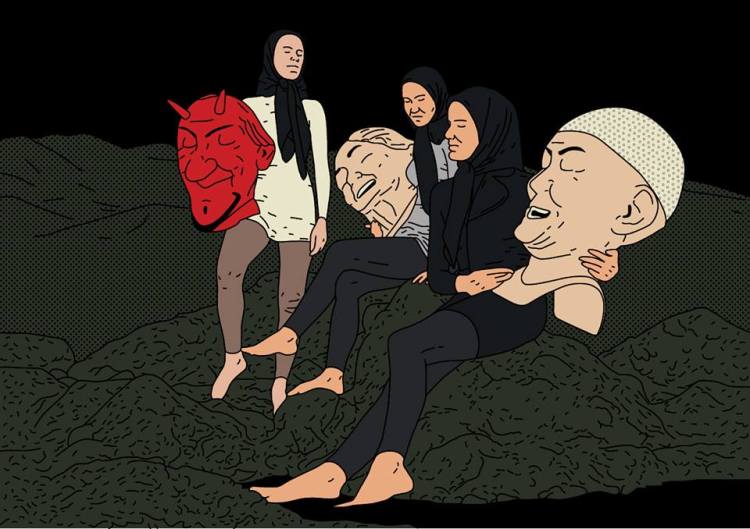 His work has all the elements of a respectable noir comic strip series. A creepy planet, citizens of a city, sinister darkness, school girls and evil lurking behind every corner. But what makes it interesting is actually who Mehdi choses to omit. In his comic strip, one very important character is missing: the hero. 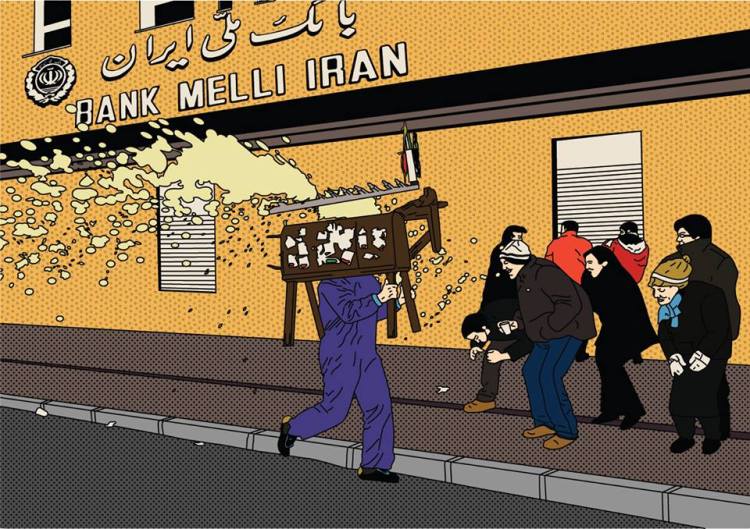 Mehdi’s pop-comic technique is print on paper. Clean lines, no fluff, no embellishment, no abstraction. It is unforgiving with no water-colour hues to hide behind. It is no surprise however, he has never been one to shy away. Even his use of soft pastel pink and blue in his work from 2014 is anything but timid.

Comic books often reference real events within the folds of their fantasy worlds. Natural disasters, wars, catastrophes, oppression and violence. The contrasting colours and polarised good and evil serve to heighten the messaging and truths behind the picture. It is no accident that Mehdi choses this technique. Could it be that the truth is more present in this made up world?

***
Mehdi Ravandi was born in Iran in 1989. He lives and works in Mashhad – Iran’s Shia pilgrimage site. He recently exhibited at Mashhad’s Aban Art Gallery.

4 thoughts on “Newsflash: TRUTH found on dark side of the Moon”