Remember Elnaz Farajollahi (She’s Sexy and She Knows It)? She is now artist in residence at AB Gallery Lucerne, and we had an opportunity to catch up with her there over a cup of tea on the balcony overlooking the Swiss Alps.

I ask her what inspires her: “I don’t need to go very far. I am simply inspired by the contradictions I see in the society in which I live. It makes for an almost surrealist backdrop. The effects of contemporary Iran on its citizens, on their relationships with one another and their own identities are all illustrated in my work.”

Just to set the scene: Inherited cultural conservatism in society where 70% are under the age of 30, Internet is found in the most remote of places, cable TV is the norm and often a needed escape. Religion laced with politics, politics explained away with religion. Young folk with ambition, skills, desires but with no real viable prospects. Economic decline intertwined with the carrots and sticks of international politics.

She goes on to tell me: “These days, romance is dead. Agenda-free relationships extinct, people marry for money, prospect and all sorts of reasons that are not love.” The brides in her piece “Bloody Wedding” and “Happy Money Problems 2” wear military boots. The Brides, absent of a groom, companioned with a rocking horse or pink flamingo, themselves a device to attach dreams to.

She first introduced us to her part-human, part-feline figures in her series Reading the Stars which we portrayed in the previous post.

From Reading the Stars: 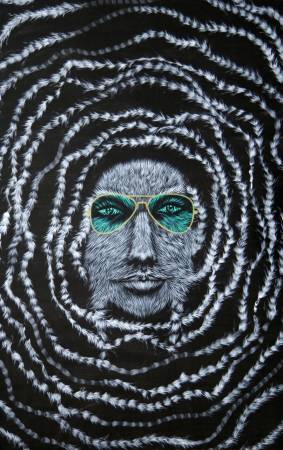 But in her new series, she exposes us to another side of these creatures. Here, Elnaz captures, if but in a single moment, the creature with its guards down. In this moment, it is revealed that this oh so sexy creature of power and pride is also longing. It seems that even the great feline minx gets lovesick sometimes.

From her new series:

I can’t wait to see all pieces in the series hanging side by side. Telling the story of Iran right now. AB Gallery. 22 November 2014.

One thought on “Watch Out! The Minx is back!”